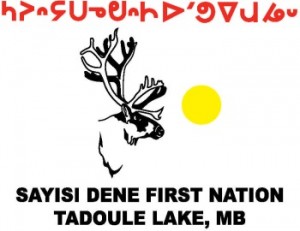 In 1969, some Duck Lake Dene began discussing the possibility of becoming self-reliant and returning to the ancestral caribou-hunting and gathering life-style. In 1973, the Duck Lake Dene moved north and set up a new community at Tadoule Lake (pronounced Ta-doo-lee, derived from the Dene ts’eouli, translated as “floating ashes”). The Tadoule Lake settlement is one of the most northern and isolated settlements in Manitoba, reachable only by plane, dog team or snowmobile. The nearest rail link is back in Churchill, 250 miles away. The settlement is located by the underdeveloped, wild, and rugged Seal River, about 80 km. south of the treeline, and centered within the winter range of the Qaminuriak Caribou Herd (barren-ground caribou). The Sayisi have a population of around 360 people.